1. The introduction of the crusher

Hammer crusher is widely used in cement, ceramics, glass, artificial gravel, coal, non-metallic mines and new green building materials and other industries. Large pieces of material putting into the crushing chamber, stacked on the intermediate bracket customized in the machine, the hammer runs in the middle of the gap in the bracket, the large pieces of material arecontinuously crushed and fallen, the small falling pieces are stricken into smash by high-speed operation of the hammer head, and finally qualified by grid plate to discharge.

Single-stage hammer crushers are used to break the general brittle ore, such as limestone, muddy siltstone, shale, gypsum and coal and etc., also suitable for crushing the mixture of limestone and clay, with full rotary mass hammer, adjustable broken plate, along the grate, security doors and other structural features.

At present, 5000t / d or even l0000t / d cement clinker production line are gradually popularised, large demand for cement production equipment are also increased gradually, of which limestone crushing capacity l000 t / h or more, to meet the requirements of the vertical grinding process system - single hammer machines have a very broad market demand. China's major cement plant selected 1000t / h above crusher, most of them are double-rotor hammer crusher. Domestic same type single-rotor crusher, only single-stage hammer crusher production can be stable to achieve this requirement at present. Single-stage hammer crusher Compared with the double-rotor crusher, with less a motor and transmission system, less a rotor, the main advantage is that the stand-alone crusher got low cost, and the majority of users are more familiar with the use of single rotor crusher. By closely tracking the using condition of single-stage hammer crusher and timely amendments to the various aspects of the shortcomings, after the stereotypes of a single hammer crusher has become the largest production of single-rotor hammer crusher in China, with a broad market expectation. 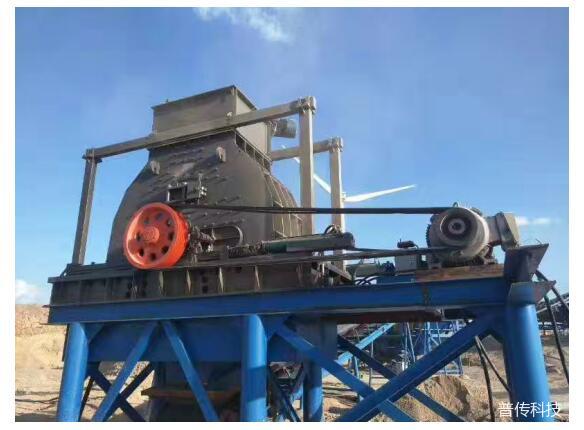 Hammer crusher and impact crusher belong to impact crushers, by crash of high-speed rotary hammer or plate hammer to the ore, also get a certain speed of movement at the same time, and then with the counterattack plate Or the collision of the liner, or the collision between the ore, the qualified products discharged outside the machine after several collisions.


The hammer crusher only strikes the ore with a single or several hammers hinged to the hammer shaft, thereby to break the ore. When the ore is broken, the speed and kinetic energy obtained are limited, and the degree of collision between the counterattack plate and the backing plate is relatively low. If the compressive strength of the ore is high and the block is large, the kinetic energy of the hammer itself is not enough to break the ore or blow it down. The hammer can rotate in the opposite direction of 360 ° on the hinge axis, after the collision and then gradually to the direction of work to accelerate to the normal speed. In this case, the ore slides along the hammer, rolling, in the tens of milliseconds time interval suffered from the next row of hammer blow. It can be seen that the exchange energy of the single impact of the hammer crusher is low and the maximum is less than the sum of the kinetic energy of the hammer at the same time.


Because the process of the hammer back to the rated speed is very longer, the acceleration time is short, that is to say, the rotor system on the hammer kinetic energy compensation is a gradual process, the impact to the entire rotor system is small. In addition, whether the ore is broken by a blow or a break or not, it only relates to the sum of impact to the hammer and the kinetic energy, the entire rotor has nothing to do with the kinetic energy. The size of rotor kinetic energy only need to ensure that the hammer can restore the original speed after the collision, that is to ensure that the speed fluctuations generated by the hammer kinetic energy compensation is within the permit scope.  If the compressive strength of the ore is too high, the property is too dense and tough, exchange energy obtained by a single impact can’t reach to the strength making the ore burst, the single crushing efficiency will be obviously reduced. If it fails to break the ore after several impacts, the overall crushing efficiency of crusher will be significantly decreased.


3. The necessity of selecting the frequency inverter

3.2 With precise speed control capability, the user can adjust the appropriate speed according to the material and the expected particle size. The output torque of the crusher by frequency control changes with the load change, which can effectively improve the efficiency.

3.3 Energy saving, to adjust the motor speed according to the broken material, improve efficiency, save energy;

4.1 The purpose of the transformation: the original control system using star-delta start, power frequency operation, start with large current impact, easy to cause power grid fluctuations, causing a great mechanical impact and wear at the same time, resulting in reducing the lifetime of the motor greatly, large maintenance, directly affecting the production efficiency. And the original control system of the motor has been working in power frequency, can’t adjust the motor speed to meet the different requirement for the ore crushing. To solve these problems, adopt the frequency transformation on the original system. The latest product PI500 series frequency inverters from POWTRAN technology are used for the system.

Easy to use PC software

Fan can be disassembled, easy to install, clean and replace


4.3 Selecting principle: As the load for crusher is not constant, with the size of the broken object changes, the range feeding to the machine is changeable, requiring the drive with large starting torque and powerful over current, so the inverter should be selected with the power 2 size higher than the load. For this application, use a PI500 400G3 inverter to drive a 320kw motor, the inverter through the external terminal to start, make the inverter start stably, running at steady operation current.

5. The effect of the crusher after frequency inverter reform

The variable frequency control system has precise speed control capability to match the torque output of the motor to the load. The user can adjust the appropriate speed according to the material and the required material size. The output torque of crusher by frequency control changes with the load change, which effectively improve its working efficiency.

The crusher controlled by frequency Inverter compared with the traditional control of the crusher, energy conservation is the most practical significant. To adjust the motor speed condition according to the broken material is economical.

5.3 Extend the lifetime of the crusher

The frequency inverter can effectively reduce the peak current of the starting current to a minimum and extends the service life of the motor.

5.4 To prevent damage to the motor